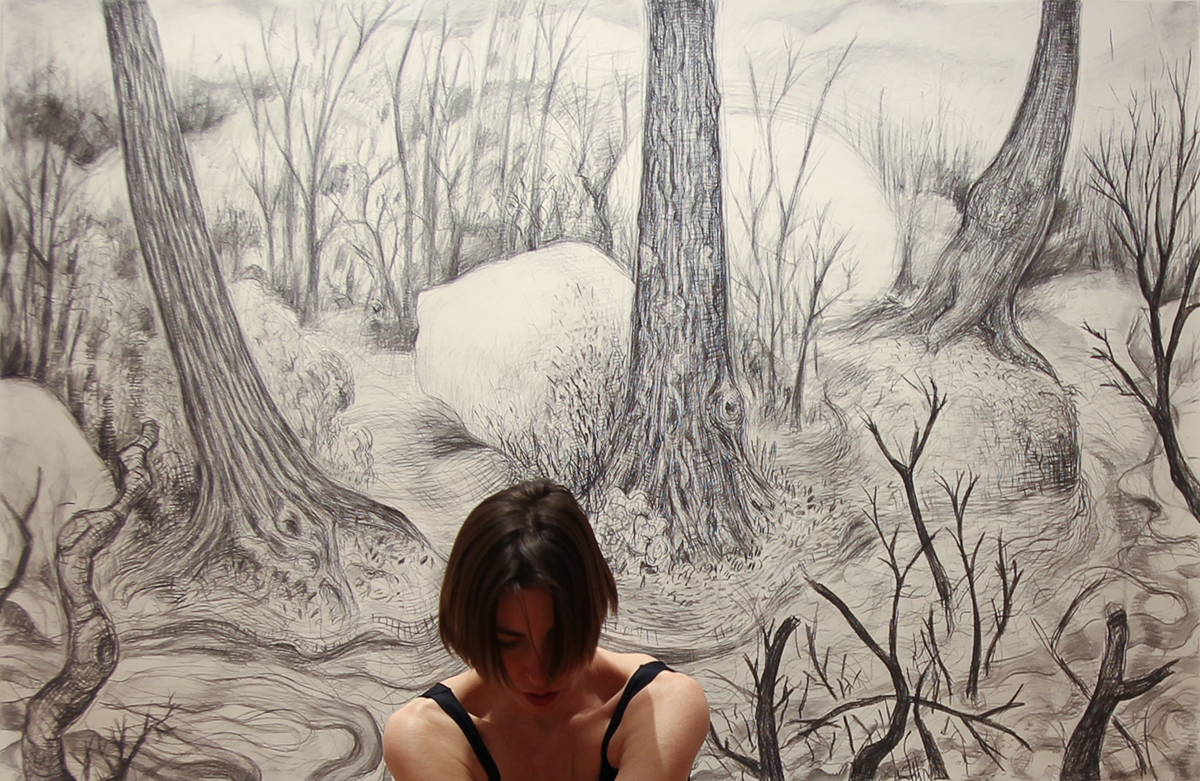 The Live Art Series presents performances by seasoned professionals showing experimental and collaborative work in the intimate salon setting of Matthew Swift Gallery or the larger, professionally-equipped venue of the MAGMA performing arts center across the street from Matthew Swift Gallery, and occasionally at the venues of partner organizations.

Live Art Series Director Sarah Slifer Swift curates and produces the performances, drawing on twenty-five years of experience in the United States and abroad as a dance artist, choreographer, and producer. Co-producer Matthew Swift is the founder and director of Matthew Swift Gallery.

Live Art Series performances are reliably announced in the email newsletters and online calendars of Matthew Swift Gallery and MAGMA and posted on their social media accounts. With less reliability, notices will also appear in various print and online bulletins and listings of community and arts events. Please join either or both mailing lists to be sure to receive news of Live Art Series programming.

Nadine Boughton Reading
and Book Launch
Nadine Boughton reads from her new book of poems. The author will remain to sign books, which will be available for the first time at this event.

To Whom It May Concern
A new work of movement theater choreographed and performed by UK-based choreographer Vincent Cacialano, together with a short film and a reading.

An improvisational performance by Sarah Hickler, Lorraine Grosslight, Cass Tunick, and Trisha Zembruski. There are two seatings at 4pm and 8pm at the MAGMA performance center.

Dance Like No One is Whale Watching
An immersive experience and play space created to evoke the fantasy of life as an orca whale presented by a team of nationally recognized performance artists at the conclusion of a residency at MAGMA.

A+B — An Evening of Contemporary Dance
An evening of contemporary dance by choreographers Ali Kenner Brodsky and Betsy Miller, the inaugural Trident Live Arts performance in the new MAGMA performance center across the street from the Gallery.

EDGE: benefit performance
The 2nd Annual Ocean Alliance Labor Day weekend art exhibition and Fundraiser Gala in partnership with Trident Gallery and the Trident Live Art Series will be celebrating contemporary viewpoints of the sea and maritime history on location at the Ocean Alliance Headquarters, the historic Tarr and Wonson Paint Factory.

Sphere
A performative installation for the historic White-Ellery House in Gloucester exploring women’s social and political power through the lens of the historic house, using movement, film, and sound.

The Political Body: Closing Party and Performance
Closing Reception for the public and the artists represented in the exhibition The Political Body, followed by a staging of Sonic Images by Pauline Oliveros (1932–2016) and improvised responses by community artists.

The Political Body in Art: A Panel Discussion
A panel discussion examining the human body as vehicle for the relationships between art and politics in connection with the visual art exhibition The Political Body.

The Political Body
An exhibition of art on the political dimensions of the body, which opens with a performance and a panel discussion.

Auto-Body-Graphic II
Auto-Body-Graphic II by Vincent Cacialano is a dance-media performance in collaboration with the Internet, exploring how language, media, and technology form and imprint meaning in the body and the mind. The evening's program also includes two dance films, collaborations between Cacialano and Alan McDermott, and an opening act of electronic music by My Brother Daniel (Scott D. Buchanan).

me is you (the space between us and them)
An installation and dance performance exploring performance as empathetic exchange.

Nest: The Performances
Part of the ongoing exhibition Nest, an evening of performance art will develop the exploration of the theme of birds’ nests and invite public participation. Cellist Kristen Miller and dancer Sarah Slifer Swift will present a new duet, Kate Tarlow Morgan will create a performance environment, and other contributors will share poetry and movement.

Invisible Cities in Performance
An exploration of Italo Calvino’s novel Invisible Cites through performance, involving spoken text, music, visual art, projected images, and dance, produced by Gallery Director Matthew Swift, Trident Live Art Series Director Sarah Slifer Swift, and artist .
Music, Dance, and Animation in Performance
Electronic music, an animated dance film, and a duet dance performance.
Music and Dance in Performance
Trident Gallery is pleased to present the Ipswich Moving Company, led by artistic director and choreographer Janet Craft, and the Boston-based improvisational music trio of Emilio Gonzalez, Matt Samolis, and Dei Xhrist for a Trident Live Art Series performance of modern dance and improvisational music. The Ipswich Moving Company will present four excerpts from Look, Look Again / Dance Installation (2015), and the musicians will present Space Abstraction Study #6, an improvisational piece for amplified kalimba, flute, and voice/movement. The Ipswich Moving Company is a professional modern dance company based in Ipswich MA led by Janet Taisey Craft for over [...]
Three New Dance Works
Trident Gallery is pleased to host this ninth Trident Live Art Series performance with three acclaimed choreographers, all professors of dance at Salem State University. Three showcases the distinct choreographic voices of Caitlin Corbett, Meghan McLyman, and James Morrow in the intimate setting of Trident Gallery. Program James Morrow brings his solo I met the soul walking along my path. The piece confronts the ways that patriarchal culture keeps men from knowing themselves. Through moments of violence and vulnerability Morrow breaks through levels of conditioning in order to find ways of expression. Meghan McLyman is [...]
X
The Trident Live Art Series presents Stephen Hastings-King’s X, a contemporary work of fiction staged as a reading with audio and visual elements. X is the story of a parasite in forty parts. It was constructed as a series of inversions. X is circular, without beginning or end. X is a situation put into motion. It would work its way into your head. Stephen Hastings-King lives by a salt marsh in Essex, Massachusetts, where he makes constraints, works with prepared piano, and writes entertainments of various kinds. His short fictions have appeared in Sleepingfish, Black Warrior Review, elimae and elsewhere.
Stone Stairway Stories
A performance piece by Carl Thomsen (dance) and Julie Cleveland (digital piano), which continues Thomsen’s decades-long exploration of the interface between dance, music, and storytelling.
Dance in Dialogue
Part I: Kate Tarlow Morgan, dance and storytelling. Part II: Sarah Slifer Swift and Loren Doucette, dance and painting.
Auto-Body-Graphic
A dance-media performance in collaboration with the internet, by dancer and performance artist Vincent Cacialano, visiting from the UK.
Kristen Miller and Junichi Fukuda
Cellist, singer, and composer Kristen Miller will play a set of her lush and original work, and dancer Junichi Fukuda will present his solo “Eclosion.” A performance surprise is also in store.
Antennae
Emily Beattie and Brian Knoth present an interactive dance and sound performance at Trident Gallery. Sensors detecting Emily’s movement drive the production of sounds through a system developed by Knoth. Space becomes an instrument that Emily can play, bending sound with her body. The dancer negotiates a compilation of interactive, recorded, and live sounds, exploring what it might look like to decipher noise through the body, searching for a solid signal.
All Over Again
An evening of music and dance performance heralds the return of spring and again unites the visual and performing arts, marking the beginning of “Persephone’s Return.” Multi-instrumentalist composers Nathan Cohen and Anthony Leva explore sonic geographies and genres. Dancers Olivier Besson and Chandra Cantor improvise duets with poetic intimacy, striking clarity, and dynamic surprise.
Then it seemed beautiful
The inaugural Trident Live Art Series performance, shown during the Stillness phase of the ambitious exhibition series, featured choreography by Sarah Slifer Swift performed by her and three other dancers to Morton Feldman’s vocal composition Three Voices, a piece written for singer Joan La Barbara featuring the opening two lines from Frank O’Hara’s poem to the composer “Wind”: “Who’d have thought / that snow falls.” La Barbara writes, “one is suddenly propelled into the storm from the infinite stillness of intricate chords.”