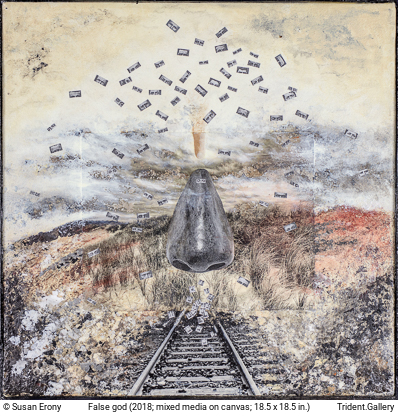 We humans have always searched for gods.
Has any god saved us from ourselves?

Unfortunately, this is not a photograph of Brahe’s nose, as I had thought. But in the end it is fitting that while working on this piece, I falsely attributed this false nose.

Tycho Brahe was a Danish nobleman, astronomer, and writer known for his accurate and comprehensive astronomical observations. He studied botanical and alchemical medicine at the University of Rostock, and then worked under the patronage of the Danish King Frederick II.

Building on the astronomical theories of Copernicus and Ptolemy, he believed that the moon orbits Earth and that the planets orbit the sun, but that the sun orbits Earth. He also argued against Aristotle that the universe was changing as new stars formed and comets traveled.

In 1597, Brahe had a falling out with the new King Christian IV and went into exile. He was subsequently invited to be the official imperial astronomer under the Holy Roman Emperor Rudoph II. He set up an observatory in Prague and during the last year of his life was assisted by Johannes Kepler, who built on Brahe’s work to develop his three laws of planetary motion.

After part of his nose was severed in a duel in 1566, Brahe wore a prosthetic nose, kept in place with paste, until he died. The nose was thought to be made of silver or gold, but chemical analysis of his bone in 2012 determined it was probably of brass.

Brahe was a pioneer in the search for discoverable truths about the universe. But his nose, plain as day, was fake. It’s an irony that has stayed with me since I learned the history as a 21-year-old. I was a silversmith at the time, and I loved that his nose was supposedly of silver. I started thinking about False god when I came across the photograph of the nose on the Internet. I knew it had to be in the center and serve as the false god.

Since Trump announced his campaign, questions of truth and lies have been a greater part of the political discourse in this country than I can ever remember. What is a fact? What is opinion? How does one tell the difference? Does truth matter? The conversation seems to me a throwback to Hitler’s concept of the “big lie,” a huge untruth that is repeated over and over as a propaganda technique (Mein Kampf, 1925).

A photograph of Crane’s Beach in Ipswich, Mass., by Jay Lee Jaroslav.

The beach is a reminder of the nature we disrespect as we follow the false god of consumerism.

My photograph of train tracks in the industrial Ruhr area of Germany.

The tracks are a reminder of the links between industry, modernity, and inhumanity, typified by the tracks which brought victims to concentration camps in Europe.

Photographs of eyes and noses.

The photographs are from a chart entitled “Synoptic table of physiognomic features: to be used for the study of the ‘spoken portrait.’ ”

Alphonse Bertillon was a French criminologist who, in 1879, developed a system of identification of persons by means of detailed measurements and descriptions of of body parts, especially the face and head — a “spoken portrait.”

At first simply a filing system for photographs, “Bertillonage” became widely used by police forces in many countries, until it was displaced in the early 1900s by more accurate and less cumbersome fingerprint analysis, to which Bertillon himself made substantial contributions.

Bertillon played an ignominious role in the Dreyfus Affair, however, when he presented in court a pseudo-mathematical analysis of Dreyfus’s handwriting, which helped cement this infamous miscarriage of justice.

Bertillon was a pioneer of science and was also a principal in one of the many instances in which objective measurements of people have been misused to demonize and persecute.